In Belgium, February represents the month of love (with Valentine’s Day) or of celebration (with our countless carnivals). In America, however, another event also marks this period: The Black History Month. You don’t know what it is? Well follow us in this little article to find out a bit more about our friends across the Atlantic! 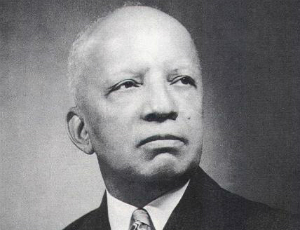 The origins of Black History Month go back to 1926 when the African-American historian George Carter Woodson decided to “create” a week that would be entirely devoted to the history of the black people in the United States, the Negro History Week. Woodson felt it was necessary to offer the American people a different vision from that commonly conveyed in history books, which first presented slaves as soulless, gentless beings, eternally dependent on the goodwill of their masters, and secondly the descendants of black American slaves as devalued individuals.

In 1976. On the occasion of the bicentenary of the Declaration of Independence, the American government decided to extend the Week to a whole Month. February is now Black History Month. The choice of February was justified, for Carter Woodson, by the fact that this month allowed to pay homage to two essential figures of the writing of the chapter of slavery in American history: President Abraham Lincoln, born on February 12th, who was the signatory of the 1863 Emancipation Proclamation that made slavery in the southern states unconstitutional, and Frederik Douglass, born a slave on February 14th, and who fled in 1838 before becoming the greatest advocate of the anti-slavery cause.

Black History Month is a means of returning a story that was stolen from African-Americans during their extractions from their countries of origin. This month allows them to have a memory of where they came from, and to legitimise their rights on the American continent.

The countries that practice it

Subsequently, other countries have followed the lead of the United States, such as the United Kingdom since 1987 and Canada since 1995. It was Ghanaian analyst, journalist and activist Akyaaba Addai-Sebo who initiated the recognition in 1987 of October as Black History Month in the United Kingdom.

He said in an interview: “Our initial aim was to first create a favourable cultural space in the British celebration calendar and, after public acceptance and recognition, to extend the October celebration to a Black History Month season. To make the Black History Season a celebration of the magnificence of cultural diversity and the enriching value of peaceful coexistence. For the African spirit, to achieve harmony – the black and white keys of the organ in tune. »

In Canada, Black History Month has been recognized since December 1995, when Black MP Jean Augustine passed a motion on the recognition of Blacks in the Canadian House of Commons. The first celebration took place in February 1996. In February 2008, Senator Donald Oliver, the first African American elected to the Senate, introduced a motion to recognize the contributions of African Americans to Canadian history and culture during Black History Month. The motion passed unanimously on March 4, 2008. The adoption of this motion complemented Canada’s parliamentary position on Black History Month.

Although Belgium has not formalized Black History Month, events such as performances, storytelling evenings, film screenings, dance jams and guided tours of exhibitions based on the history and culture of the African Diaspora taking place during the same period are already taking place.

As we all know, Belgium also has a history linked to colonisation, which is so far embellished by society, but why not make official the month of black culture, well it’s simple, Congo did not belong to the Belgian people or the country, the wealth acquired went directly into the pockets of King Leopold II and did not come from the Belgian coffers, it was the king who granted the Belgians new infrastructures with the money obtained from Congolese resources.

And you? what do you think? do you think it would be normal to make this event official or not? We would be delighted to hear your opinions, tell us in the comments!

“We should not highlight black history, but black people in history. We do not need the history of certain races or countries, but rather the history of a world free of national prejudice, racial hatred and racial intolerance.”